A Day on the Lines 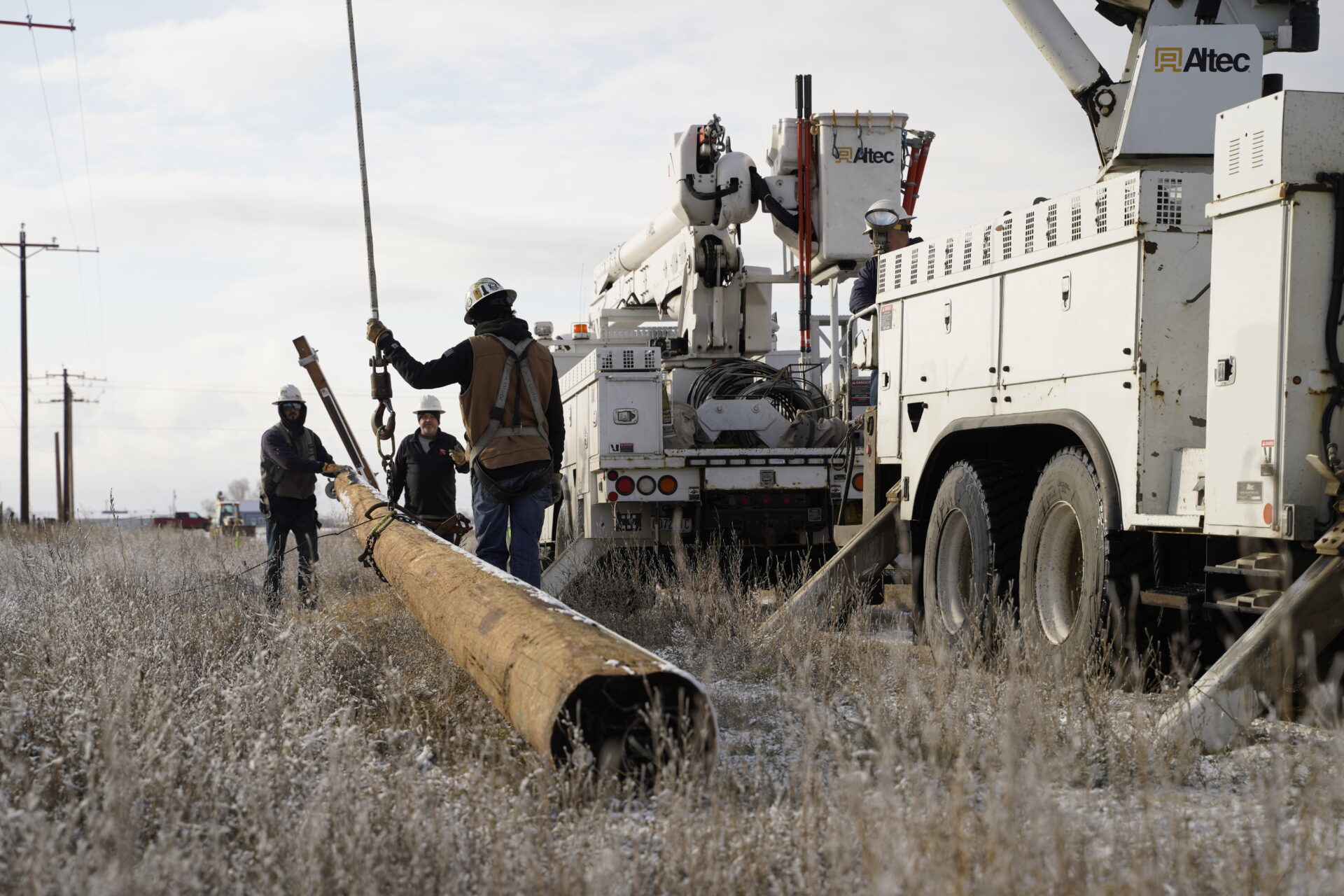 Story and photos by David Herder

As the Benton Rural Electric Association lineworkers arrive to their worksite on a late February morning, the poles they plan to raise are covered in snow.

For the past week, foreman Chris Hill and his crew at the central Washington cooperative have prepared to run new, higher-capacity power lines along a short stretch approaching a freeway in Sunnyside.

The prior workdays had been cold and windy, but manageable. An unexpected overnight snowfall adds to the difficulty.

The snow is just another hurdle in the day in the life of a lineworker.

Chris and his crew delay their start by two hours to let roads thaw. It is better to play it safe when driving the fire-engine-sized utility work trucks. They wouldn’t want to end up like the car that flipped over just 100 yards from where power lines cross the freeway.

Before the higher-powered line can be installed, the stretch needs new, taller poles and the old, still electrified lines must be spread out, making space for the new line. The morning’s project is to raise two taller power poles, move the old power lines to the side and then remove the two poles being replaced.

The new line is needed to support a hop processing plant that is expanding.

“When they add load, and they add a lot of stuff, we have to make our conductor bigger to carry it all,” Chris says.

His crews can put up about 20 poles and a mile of line in a week, he notes.

Benton REA requires at least four lineworkers to be part of a crew working with live wires. On this particular day, there are five: Chris; Willie Yager and Andy Candanedo, journeyman lineworkers; and Austin Bolt and Kaleb Wentz, apprentice lineworkers. 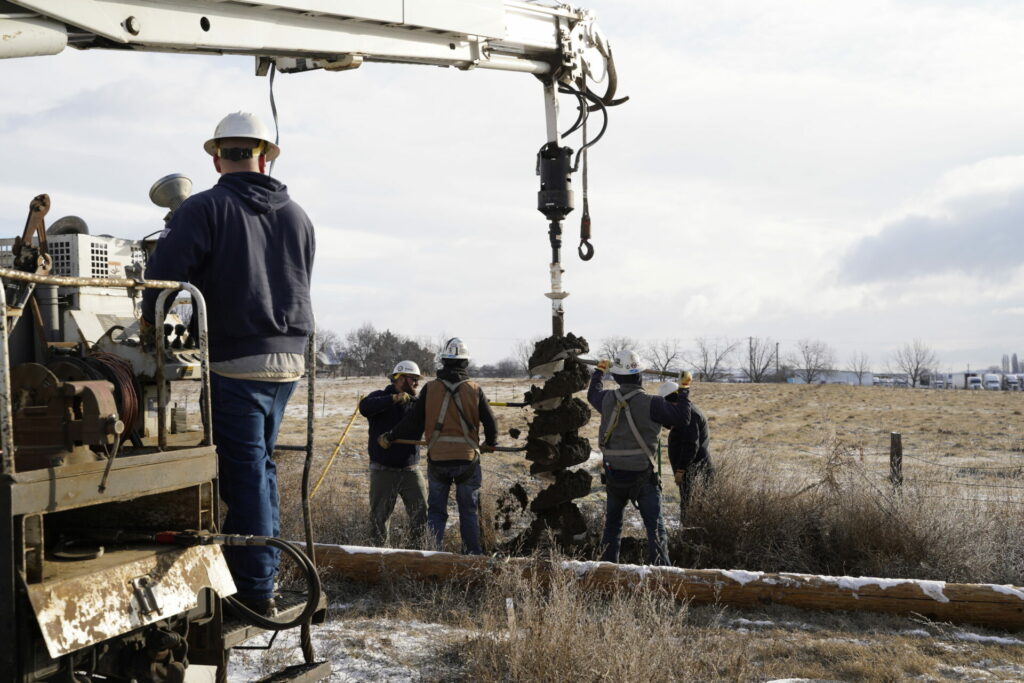 “We try to keep it so everybody’s on the same board,” Chris says, noting the same workers usually see a project through.

Austin starts by operating the drilling rig. It looks like a fire truck, but rather than having a bucket, there are a few Swiss Army knife-like tools sprouting from the top.

First to be used is the drill.

The crew determines precisely where the new pole will sit, and Austin drills out a hole.

Austin is a second-year apprentice who joined Benton REA in 2020. Most lineworker apprenticeships last three years. Each summer, apprentices go to training camps that help bolster their skills.

Kaleb is already a hot apprentice. He and Willie will do the day’s line work. 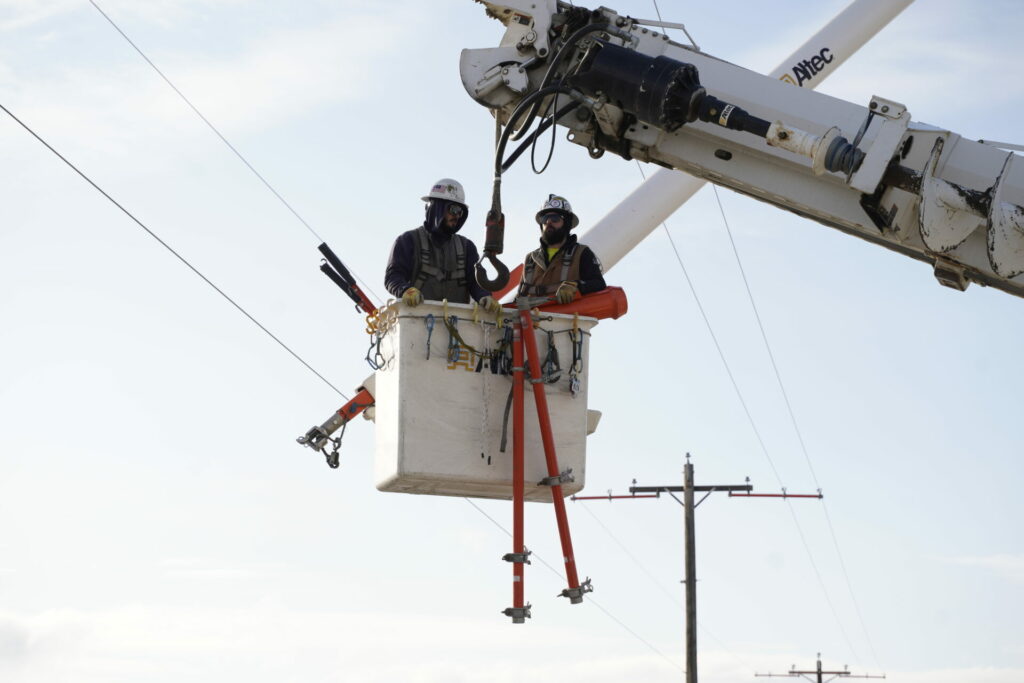 Benton REA lineworkers Kaleb Wentz and Willie Yager prepare to work on high-voltage power lines as they are lifted in a bucket. Photo by David Herder.

Once the pole is raised and planted, Kaleb and Willie use a bucket truck while they transfer wires from the old poles to the new one.

“Hot work takes more time than anything else in our world,” Chris says.

Working with live power lines makes line work one of the most dangerous jobs in the country. A variety of equipment helps keep workers safe.

Willie and Kaleb use hot sticks, or insulated poles. They also wear insulated gloves. Importantly, they wear harnesses similar to what parachutists use that latch on to the bucket.

If someone were to fall out, “you’ll dangle below the bucket until the other person can get you to the ground,” Willie says.

As with many Benton REA lineworkers, Willie entered the profession after a career in construction. He and his wife had traveled in a fifth-wheel trailer to various construction projects. Willie’s job as a lineworker gives them an opportunity to stay in one place.

Chris transitioned out of construction when he and his wife had a daughter, and he wanted to spend more time with his family. Travel for construction would have meant being gone for long stretches of time.

He says he joined Benton REA because cooperatives are great places to work and being a lineworker allows him to be at important events. 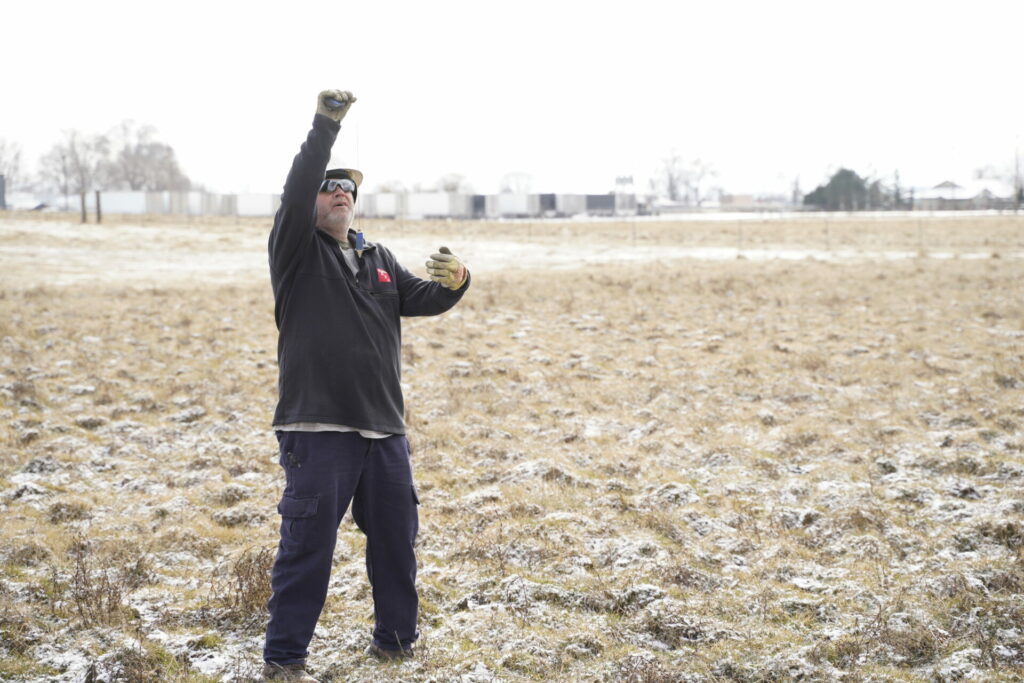 “I could go to lunch with her, go out at recess and push her on the swings, be there for anything,” Chris says.

On this day, like most days, the important events are in the field, and the lineworkers brave the elements to maintain the power grid. Once Willie and Kaleb finish moving the lines to the new pole, they use a chainsaw to remove top sections of the pole before Andy uses the rig to pull the old pole out of the ground.

With one pole done, the crew moves down the line to the next pole—the next step in keeping the power flowing.