Board of Trustees and District Map

A board of eight elected Trustees is responsible for the overall direction of the business and affairs of Benton REA through the adoption of policies, budgets and providing direction to the general manager. Trustees are elected by the members of their respective district within the Benton REA service area and serve for a term of three years. The Benton REA service area has been divided into eight districts to allow for equal representation of its members.

Trustees must be a residential member of Benton REA. A trustee may not hold any financial interest in selling electric energy or supplies to Benton REA. In addition, a trustee may not be an incumbent or candidate for any elected public office where salaries are paid. 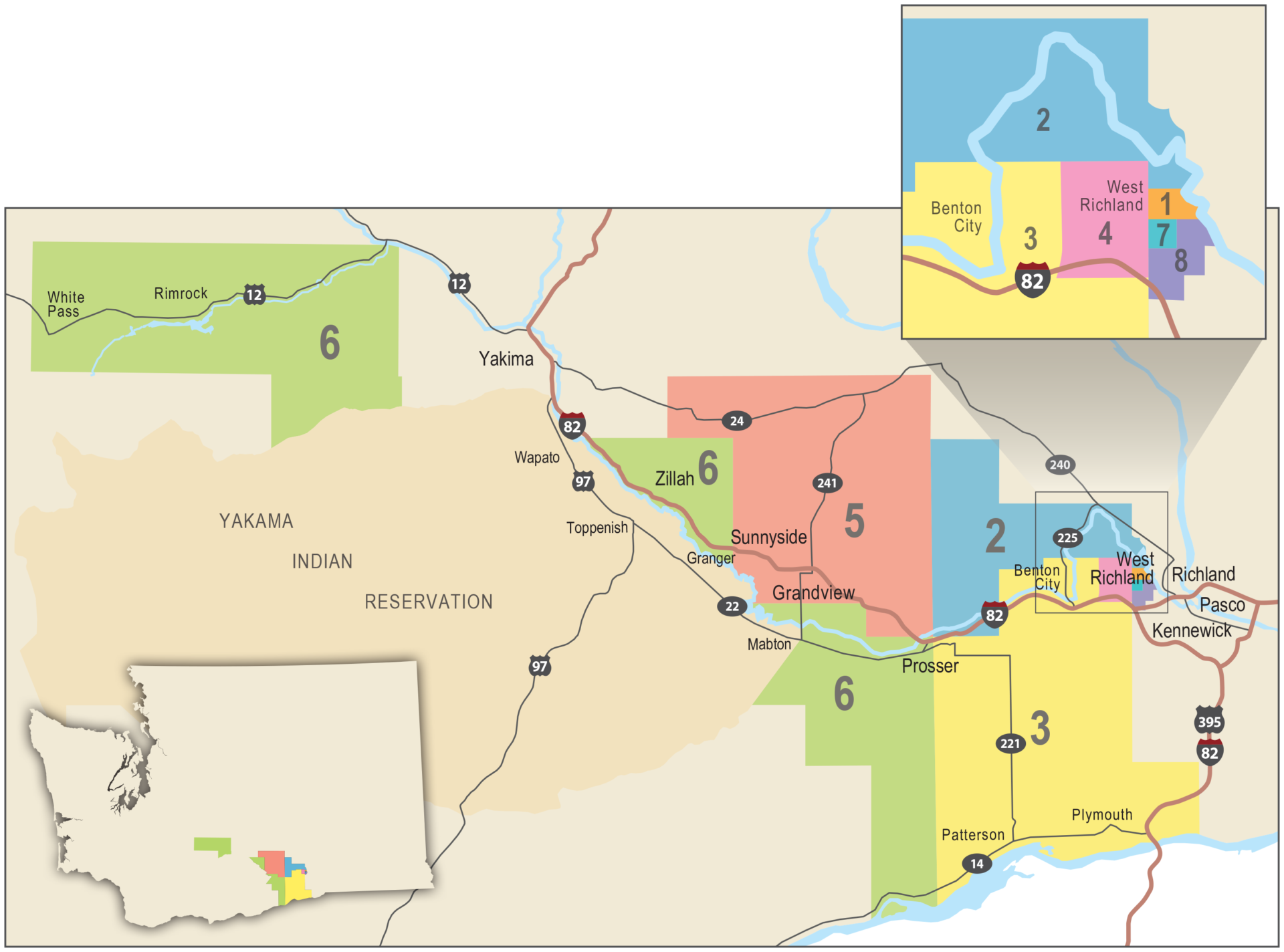 Dan Plung grew up in New York City seven blocks from Yankee Stadium. He had the advantage of attending the original model for STEM education, the Bronx High School of Science, and then graduated from the City College of New York with a Bachelor of Arts in English. Dan attended graduate school at Idaho State University and decided the Pacific Northwest was home.

After earning his doctoral degree in English, Dan had a long career working at various government sites while also teaching at universities including Washington State University, Tri-Cities. Dan has also served the local community by sitting on the Columbia Industries board and on the Washington State Board of Education.

Author of several books on professional communication, Dan brings skills in optimizing processes, strategic planning and enhancement of governance to Benton REA’s Board of Trustees. He was driven to join the board because he shares Benton REA’s commitment of doing what we can to sustain and enhance the community and lifestyle we enjoy in Washington State.

Mike Freepons is a third-generation farmer who lives on the Roza north of Prosser where he grows concord grapes, wine grapes and apples. He bought the 160-acre farm in 1979, and the farm is less than one mile from where he grew up.

Remaining local throughout his youth, Mike went to Whitstran School and graduated from Prosser High School. Mike attended Washington State University and graduated in 1975 with a Bachelor of Science in agricultural education.

Mike enjoys fishing, hunting and teaching the younger generation about hunting. Mike has been a hunter education instructor for the Washington Department of Fish and Wildlife.

Mike has served on the Benton REA Board of Trustees since 2006.

Bob Evans brings a strong background in agriculture, engineering, administration and public service to the Benton REA board. He previously served on the Prosser School Board with three years’ experience as president. He was appointed to local planning boards in Colorado, Montana and Washington. He is active in several Lions Clubs and church activities.

Bob was raised on a ranch in western Colorado before getting his doctorate in agricultural engineering. He spent his career investigating means to improve profitability of various irrigated and dryland agricultural enterprises. Bob served as the Colorado State irrigation extension specialist for five years, worked for Washington State University for 20 years as a researcher at its Prosser center and then joined the USDA-Agricultural Research Service in Sidney, Montana, as an administrator and researcher for 12 years.

Bob retired in October 2012 and lives with his wife, Carrell, on a farm west of Benton City. Their three children all graduated from Prosser High School. He remains professionally active.

Bob was appointed to the Benton REA Board of Trustees to fill an unexpired term in May 2015.

Ron is Benton REA’s newest trustee and is very excited to be of service to Benton REA and the community. Ron is originally from Portland, Oregon, but spent many of his growing up years in and around Yakima, attending A.C. Davis High School.

He spent two tours of duty with the U.S. Army. His passion for community service was discovered after the military when he became a volunteer firefighter and reserve police officer. Ron spent 31 years as a career firefighter in Kent, retiring in 2012 as a Station Captain. During that time, he also served eight years as a Fire Commissioner with South Pierce Fire and Rescue.

Ron and Karen, his wife of 34 years, enjoy family activities with their two adult daughters and two grandchildren, as well as traveling, fishing, shooting sports and an old motorcycle.

Ron was appointed to the Benton REA Board of Trustees to fill an unexpired term in October 2018. He has since completed the program to become a Credentialed Cooperative Director.

Tim is a fourth-generation grape farmer who lives just north of Grandview. He and his wife, Gina, farm 295 acres of Concord grapes and 20 acres of Niagara grapes. Tim was educated in Grandview and attended Seattle Pacific University graduating in 1981 with a bachelor’s degree in History. Tim served on the Grandview School Board of Directors and retired in 2016 after 20 years of service.

Tim has been a Benton REA member since 1989 and a board member since 2014. He is a Credentialed Cooperative Director and has earned his Board Leadership Certificate. Tim is a firm believer in the cooperative way: members joining together to create value and protect their interests through commitment to their business.

Tim and Gina have three married daughters and two grandchildren.

Scott Fisher is a longtime resident of the Yakima Valley. He was raised in Grandview and continues to help his father on the family cherry farm. He currently lives with his wife, Mary, on a small merlot grape farm southwest of Prosser. They have two adult children living in the Tri-Cities area.

Scott enjoys camping in their old Westfalia van, rescuing old cars, woodworking and making wine. He was elected to the Benton REA Board of Trustees in 2017 and has completed the NRECA coursework to become a Credentialed Cooperative Director.

Catherine Russell prides herself on being active in the community and feels privileged to represent the Benton REA members as a trustee.

“I believe in doing volunteer work within the communities I live. I am willing and able to continue dedicating the time needed to represent the members’ interest at Benton REA,” she says.

Catherine feels it is important to study and keep current with regard to the electric utility industry to better serve her district. To this end, she has earned the Credentialed Cooperative Director certification and Board Leadership Certification. She has a Bachelor of Arts in social science from Washington State University Tri-Cities. Before retirement, she worked as a payroll supervisor.

Catherine and her husband, Kevin, moved to the Tri-Cities in 1982 and to West Richland in 1994. In her spare time, Catherine enjoys traveling, sewing and gardening.

Board Meetings, Agendas and Minutes

The Benton REA Board of Trustees meets on the last Wednesday of the month at 6 p.m. unless otherwise scheduled.